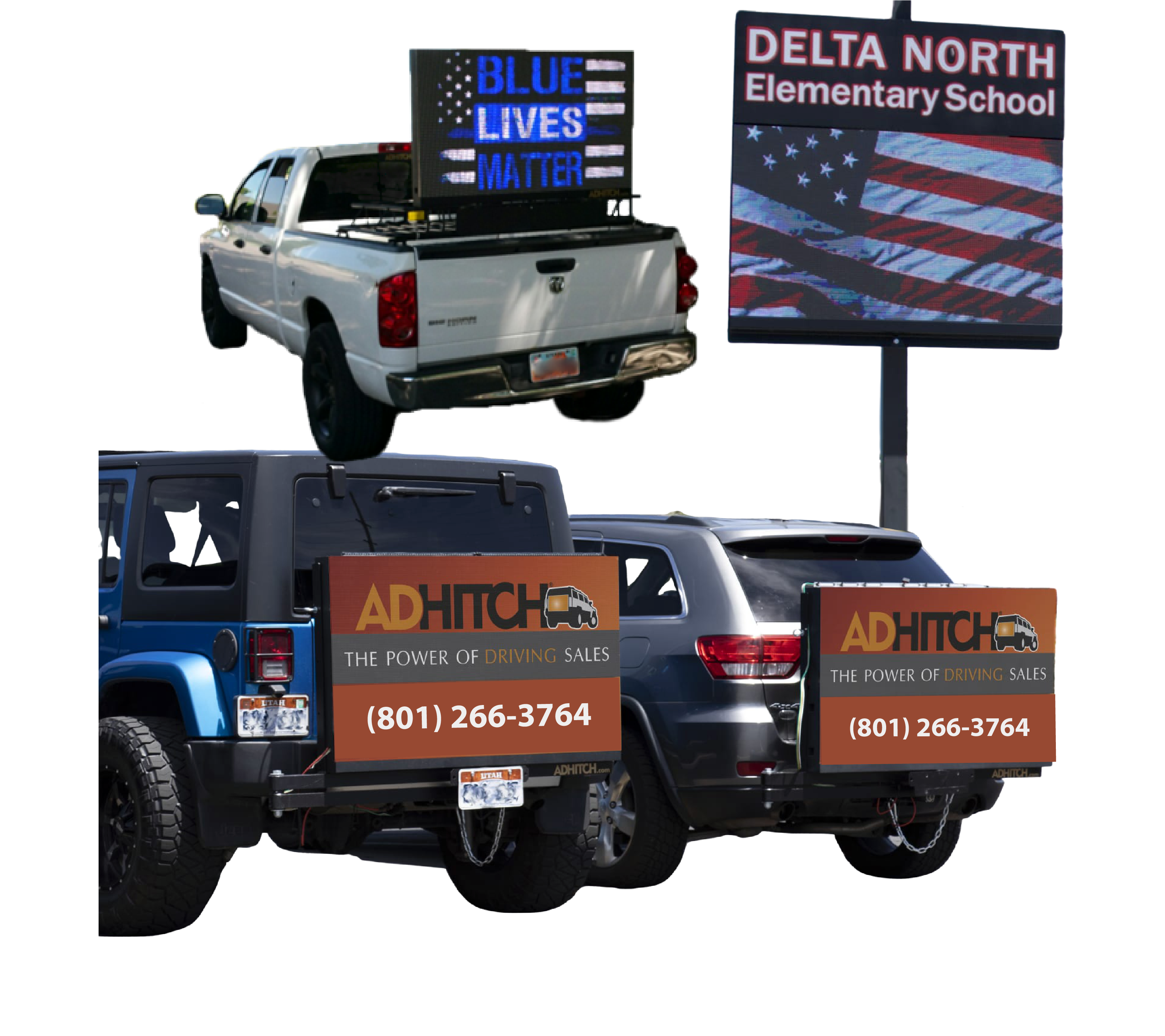 We create portable billboards that can attach to any vehicle with a 2” hitch receiver. AdHitch is a 60” LED screen that connects to your smart device and shows ads and messages to your fellow drivers. AdHitch works tirelessly—our digital billboards are always running and bringing back positive results.

Portable electronic billboards grab customers attention immediately. They’re fast, unique, and instantly customizable. You can display any type of visual medium, including videos, text, and GIFs. AdHitch gives you more ways to reach your audience than ever before. Unlike traditional billboards, which are expensive to own and have little flexibility when renting, AdHitch works however you like it, in any weather, with any message.

AdHitch is a 60” LED screen with a 12 volt power supply. It attaches to your truck, car, Jeep, or other vehicle and displays messages and images to other drivers. This portable electric billboard is an attention grabber—we’re the first-ever portable billboard, featuring quality materials and sturdy construction. Our screen are waterproof, weatherproof, and long-lasting.

AdHitch brings to the table what LED billboards can’t—mobile ad space. Whether you’re advertising for your own business, selling ad space for other businesses, or trying to quickly inform citizens of an emergency, AdHitch revolutionizes the ad industry by bringing your message directly to the customers. Don’t wait any longer to meet your target audience—meet them today with the power of mobile billboards!

The idea behind regular billboards is that they catch your attention while you’re driving. Traditional billboards have the appeal of being cheaper, but LED displays show multiple ads and frequently perform better in clinical studies. Ad agencies like LED billboards because they can cram tons of ads onto the same billboard, often allowing only 8-10 seconds per purchase. With how quickly people drive pass stationary billboards, compounded with the flood of billboards that drivers see, a few seconds isn’t very much at all.

And what if you can’t keep your message to 8 seconds? What if that new video you just filmed won’t fit in the timeframe assigned to you? That’s where AdHitch comes in. When you own your own portable billboard, you also own your own timeframe. AdHitch enables you to show whatever you want, whenever you want, for however long you like. There’s no limit to how long you can advertise, and your advertising medium can include stationary images, videos, and moving text.

Portable billboards are also closer to drivers’ eyes. Drivers are already watching the road, so it’s more natural for them to glance over to your screen while they’re looking for other cars. AdHitch grabs their attention right when they’re already on the lookout, especially since many drivers are already used to acting on advertisements they see on the road.

On top of that, portable billboards have what traditional billboards can’t pull off: portability. Once you’ve purchased ad space on a regular billboard, you’re stuck. Even flashy LED billboards still don’t have the flexibility to show up in places other than where you’ve bought ad space. You might not even know where to purchase stationary ad space, which means some unscrupulous buyers can sell you spots that don’t get many views. And when ordinary billboard prices can set you back anywhere from six hundred to two million dollars, you don’t want to mess around with your budget.

Instead of worrying whether your customers will come to your message, take your message to your customers. Whether you’re driving on rural backroads or bustling highways, AdHitch is a go-getter and an eye catcher. It’s passive advertising—once it’s installed, you’re set. The only changes you have to make are related to your message, since you can change your ad with the push of a button. We give you AdHitch ready for action, with a convenient “plug and go” feature that enables you to start your mobile billboard advertising campaign as soon as it’s out of the box.

AdHitch is an LED billboard, but its construction is sturdy and reliable. With waterproof coating and a seal on each LED module, this portable billboard can keep running, rain or shine. Because of how bright LED bulbs are, they can keep running at night, so you won’t have to install any extra light strips or lamps to keep operating at night. Mount the mobile billboard onto your hitch receiver, hook up the 12 volt power supply, and start driving! Portability puts YOU in control.

How Should You Use AdHitch?

With its compact performance and portable power, AdHitch is the perfect addition to any marketing campaign or event. Regular billboards don’t have the power to reach your audience like portable electric billboards do. Once you’ve found the perfect place to advertise, schedule drives or pass-bys with a vehicle bearing the AdHitch to score impressions instantly. When your vehicle is parked outside your business, pedestrians and drivers alike can see the displayed screen with a message of your choice, or an ad directing them to your social media pages.

Law enforcement and government officials will enjoy AdHitch’s instant communication and reliable service. With the ability to get messages out instantly, and with seamless connection to the devices via WiFi, ethernet, and other connections, first responders can instantly get out a simple message like “Neighborhood fire at 800 West,” “crash near the supermarket on 12th and 42nd street,” etc. Seconds save lives, and AdHitch’s easy setup and guaranteed performance saves lots of seconds.

Portable billboards are also perfect for events. After driving around town and advertising the morning of the event, park your display vehicles at the location and give directions, maps, announcements, and advertisements, all from the back of your vehicle. With an AdHitch unit installed on your vehicle, the possibilities are endless as you engage your customers with a dynamic, portable billboard.

Portable electronic billboards are the future, so step into the future with us! Hook onto your strategy today with AdHitch! Request a free demo here and take control of your campaign!

Investing in the Best Ut

Reasons to Invest in an