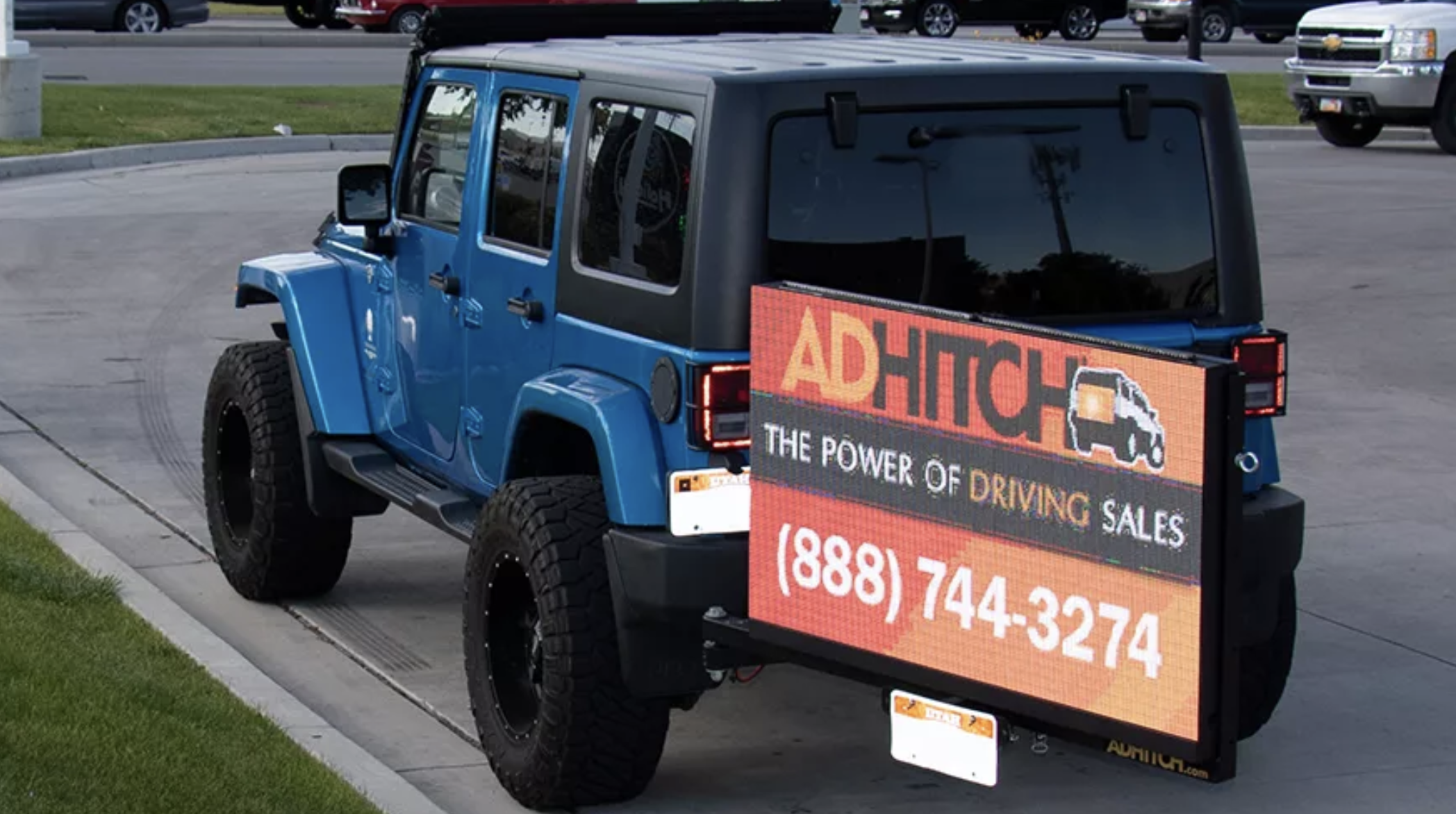 Imagine an LED billboard you could take anywhere, with instant uploads from your mobile device and countless impressions from the people you pass. It’s not just a dream—at AdHitch, we’ve made portable electronic billboards a reality.

AdHitch is the world’s first mobile billboard, and is the perfect size to fit on the back of your vehicle. It’s a 60” screen that mounts on your van, Jeep, truck, and any vehicle with a 2” hitch receiver. With a high-quality LED screen, easy installation, a waterproof seal, and seamless uploads from your mobile device, AdHitch is a must-have for the future of billboard advertising.

Traditional billboards are limited in their exposure. Once you rent or buy a regular, stationary billboard, its success is out of your hands. The odds of your ad finding your target audience are the same as all the other advertisers with a billboard. Drivers will only get fleeting glimpses of your billboard, with even less time to write down your contact info. On top of that, some agencies may not allow much flexibility in how they show your ad; it may only show for 8 seconds, which is almost nothing in advertising time. if you need to change your message, it could set you back several hundred dollars.

With AdHitch, you get total control over ad placement and creative design. Portable electronic billboards can be transported immediately, without the hassle of cancelling and paying for a new traditional LED billboard. You get the same high-quality image as a regular one, with the option of uploading videos or GIFS from your mobile device.

On top of that, AdHitch allows you to change up your game any time you like. As soon as you want to change up your mobile billboard advertising strategy, simply change up your ad’s look and upload it to the screen. AdHitch quite literally puts you in the driver’s seat of your own advertising agency, removing the middleman and giving you the control you need to get reliable results. There’s no limit to the methods of displaying your portable, convenient LED billboard.

Digital billboards have skyrocketed in popularity because of their visual appeal, customizable messages, and easy transitions. A regular billboard only shows a single message, and is susceptible to peeling, faded colors, or dirt and grime. On the other hand, digital billboards can remain active for as long as 11 years, so your message won’t go away anytime soon. LED billboard advertising is also highly ranked higher than traditional billboards when it comes to looks. In other words, travelers simply feel that LED advertising is a “cool way to advertise.”

You also won’t have to pay for ink. Printing traditional billboards means putting ink on a surface, and prices for print displays can rack up quickly. For smaller, easier advertising, an LED billboard eliminates this disadvantage by using a digital screen. AdHitch can upload text, images, GIFs, and videos in real time through four different methods: ethernet cord, WiFi connection, 3G, and USB stick. Starting your portable billboard campaign with AdHitch is as easy as setting up your TV.

LED bulbs last for a very long time, and they light up at night. This means that your AdHitch mobile billboard won’t require any additional lighting or set-up to keep working. On top of that, AdHitch comes with waterproof coating on each module, so your billboard campaign won’t have to take rainy days off. Day or night, rain or shine, this portable LED billboard will keep drawing attention wherever you drive.

Portable billboards also come with an easy advantage: they go anywhere! With portable LED advertising, you take control of your campaign by bringing the message directly to your customers. With the right strategy and research, you can find where potential customers are located and schedule a drive around those areas. If you work locally, AdHitch’s constant, reliable displays will bring in the attention of the crowd you’re trying to reach. It’s also passive portable advertising, meaning that once you set up the display you don’t have to do anything extra to get attention. You can even change your ad with the push of a button. Connect AdHitch to your mobile device and watch as its message immediately changes to whatever you want.

Any business can benefit from mobile billboard advertising. It’s new, it’s flashy, and it’s unlike anything your customers have seen before. LED screens have proven results when it comes to advertising and customer appeal. Portable LED displays take the visibility, reach, and success of billboards and compact them into a 60” screen that you can take anywhere.

Self-employed freelancers will find local business simply by driving around. Start-up businesses can benefit from an evergreen advertising campaign that maximizes their advertising presence on the highway, where many drivers are ready to receive advertisements. Blue collar workers can enjoy the same benefits of pasting a logo on their truck’s door, but powered up with the “cool factor” of a professional LED screen. Having AdHitch also shows potential customers the vehicle you’ll be arriving in, and little details like that help buyers feel comfortable about someone coming into their home. You’ll look professional and composed before they even pick up the phone and call.

Advertising agencies will enjoy AdHitch’s infinite customizability. A portable LED billboard allows you to show several companies’ ads at a cheaper price, with the same power as a stationary LED billboard has. AdHitch engages customers in a new and exciting way, with reliable technology to deliver quick and easy messages.

Law enforcement and government agencies will love AdHitch’s potential for instant messages. If there’s a crash on the highway, change the AdHitch message on a local vehicle to read “Crash near the Exit 307,” and instantly warn locals of the danger. In an emergency situation, the AdHitch provides crucial visual space to get the word out and prepare citizens for inclement weather, civil unrest, or criminal activity.

Hook your strategy today with AdHitch! Request a free demo here and take control of your campaign!

Investing in the Best Ut

Reasons to Invest in an